Public opinion about pharmaceutical companies has changed in surprising and positive ways.

A recent report from the Reputation Institute, a public perception research and advisory firm, ranked the top pharmaceutical companies in the world by reputation. The analysis determined that the overall reputation of the pharmaceutical industry is steadily improving.

The “Pharma RepTrak 2016” report measured a company’s ability to deliver on stakeholder expectations in the following 7 areas:

Of note, the Reputation Institute determined that the key drivers of reputation in this industry are products and services, governance, and citizenship. Collectively, they comprise 46% of a company’s reputation.

Companies that effectively deliver within those 7 domains can expect the following supportive behaviors from stakeholders:

Kasper Ulf-Nielson, executive partner and co-founder of the Reputation Institute, told Pharmacy Times that one of the major challenges facing pharmaceutical companies is “overcoming consumers’ perception that they’re all the same.”

“There’s a big opportunity for differentiation, especially on governance and citizenship,” he explained. “Companies that want to improve their reputation should focus on developing socially responsible programs that align with their corporate identities, in addition to high-quality products.”

The following companies have managed to differentiate themselves and land a spot in the top 5 list:

1. Bayer (70.6)
For the 5th year in a row, Bayer is the top-ranked pharmaceutical company, according to the Reputation Institute. It’s the only drug company to receive a “strong” reputation score (>70) as opposed to just average.

Bayer led every other pharmaceutical company in the products and services, workplace, leadership, and performance categories. 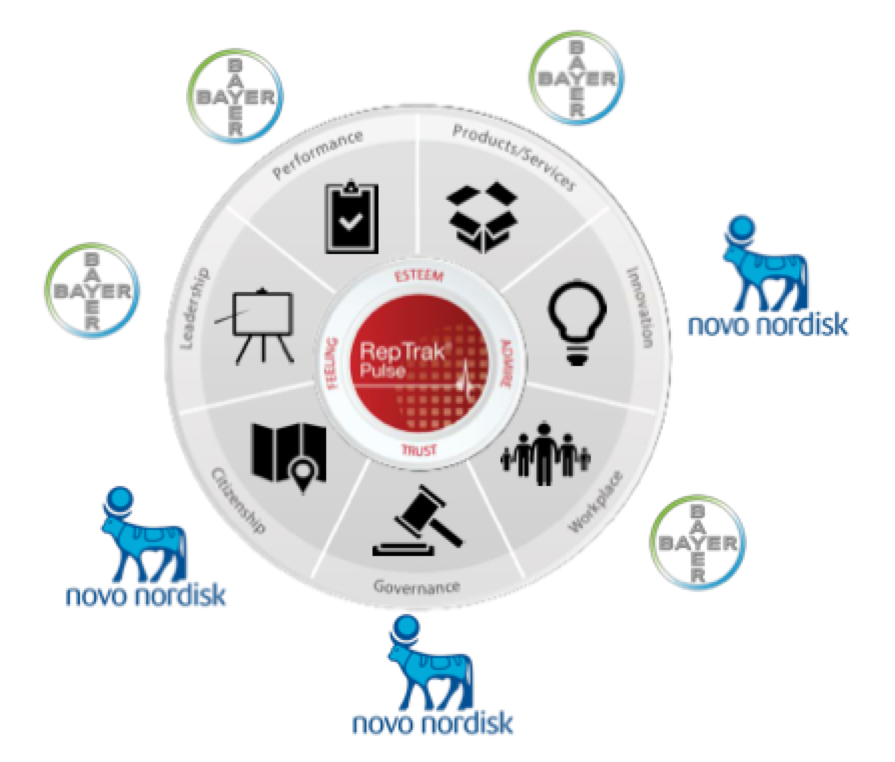 With respect to governance, Abbott received one of the best scores. Just 4% of respondents disagreed when asked to affirm the statement “[The company] is a responsible company; it behaves ethically and is open and transparent in its business dealings.”

Both are considered to be blockbuster drugs, and both face patent expiration this year.

The drugmaker topped its competition in the reputational subcategories of citizenship, governance, and innovation.

4. Roche (68.4)
Roche’s scores across the board moved in a positive direction, although it received a “strong” reputation score (70.4) among 25- to 34-year-olds when the data was controlled for age.

The company also received one of the best scores from participants with respect to governance. Just 4% of respondents disagreed when asked to affirm the statement “[Company] is a responsible company; it behaves ethically and is open and transparent in its business dealings.”

Of note for pharmacists, the FDA expanded the uses of Roche’s obinutuzumab (Gazya) on February 26, 2016. Previously approved for patients with previously untreated chronic lymphocytic leukemia, Gazyva is now indicated for the treatment of follicular lymphoma in patients who didn’t respond to rituximab (Rituxan), as well as in those whose follicular lymphoma relapsed after treatment.

Merck is considered to be one of the “most trustworthy and honest” companies ranked by the Reputation Institute.

In February 2016 alone, the FDA approved the company’s single-dose dimeglumine (Emend) injection as prevention treatment for nausea, as well as its elbasvir and grazoprevir (Zepatier) with or without ribavirin for the treatment of chronic hepatitis C virus genotypes 1 and 4 infections.